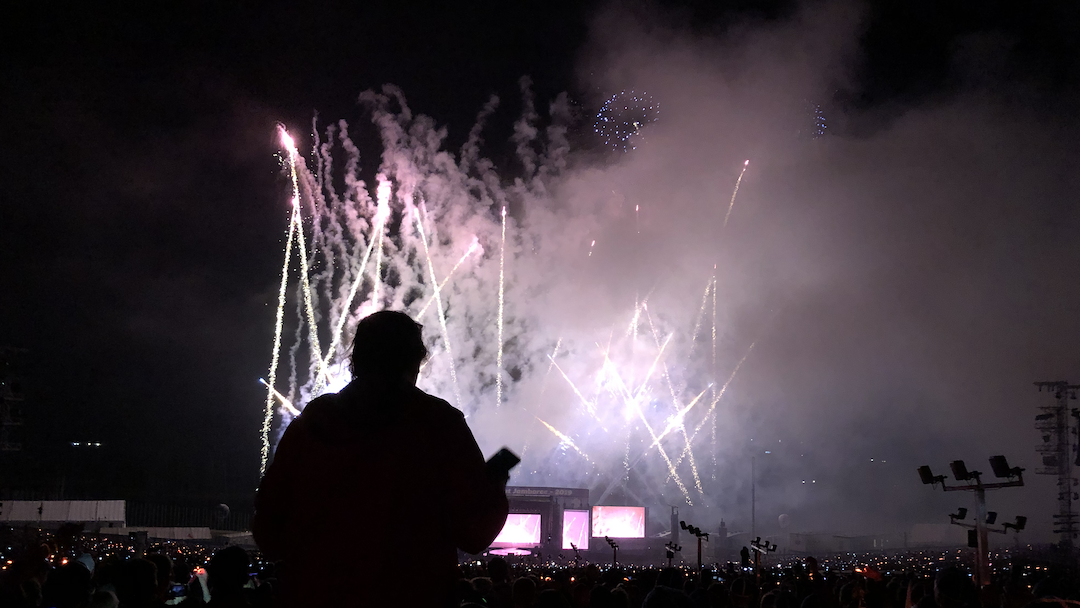 Ten days after the Jamboree opened, it was time to gather one last time as the 24th World Scout Jamboree. With heavy hearts, buoyed by the hope of squeezing every last ounce of Jamboree fun out of the few hours remaining together, the scouts gathered around the stadium. The weather cooperated to provide an extra hour of camaraderie before the show brought the Jamboree’s official close. Scouts proved that a little precipitation is nothing to get in the way of dancing, singing, shouting scouts who want to have fun.

When the time came for the show to finally start, the US Old Guard took the stage to perform some traditional US fife and drum music, ushering in an introduction to the BSA, the last of the three host organizations to be highlighted on stage.

After a short video introducing the BSA, Secretary-General of the World Organization of the Scout Movement Ahmad Alhendawi took the stage for some closing remarks. He reminded us that, although we may wish that Jamboree could never end, it is only another step in a journey to making the world a better place. “You have learned so much, now it is time to apply what you have learned.” With that, he declared the 24th World Scout Jamboree closed.

WOSM Secretary-General Ahmad was followed by his former colleague, past United Nations Secretary-General Ban Ki-Moon. Ban Ki-Moon was the Secretary-General under which the SDGs, the UN Envoy on Youth (a position first held by Ahmad Alhendawi), and UN Women were created, among other accomplishments. Ki-Moon started his address wondering aloud, “if you can do this [living in harmony at the Jamboree] for 10 days, why not 100 days? and then 1000 days?” The Jamboree, Ki-Moon reminds us, is not meant only to be a stellar memory but to be the start of a mission. “You are now true global citizens… global citizens are those who identify themselves not as a member of a nation but as a member of humanity. Global citizens must not build wars but instead build bridges between people… They are committed to helping others… I know you can do it, you can be a global citizen.”

Ban Ki-Moon was followed by the Dream Team. This group of eight young adults has worked the last seven years as leaders of the Jamboree planning team. Not only have they dedicated countless hours of their time to make this Jamboree a truly youth-led event, they  also inspired a greater level of youth participation in high-level leadership including the UK Contingent’s all-participant Impact Team, the US Contingent’s 1:1 ratio of “adultier adults” to young adults, and the 25th World Jamboree’s Brush Team. The Dream Team have passed the onus of young adult scouting leadership on to the rest of us just as they passed the Jamboree flag on to the Korean Scout Association.

The closing show finally wrapped up with a stellar performance by Pentatonix, performing both old hits (Hallelujah) and brand new ones (Evolution of Ariana Grande). They were followed by an innovative (and mind-blowing) dance troupe who combined their choreography with digital effects to create a seemingly impossible performance. The show ended with the fireworks show to end all fireworks shows. This immersive extravaganza of lasers and fireworks reached the awe-inspiring intensity appropriate to close the once-in-a-lifetime experience that was the 24th World Scout Jamboree.

Kelsey McLeland's 5 Reasons to Attend the WSJ Kelsey McLeland, Contingent Events Young Adult, is excited to see you next weekend at the BSA...
Read More