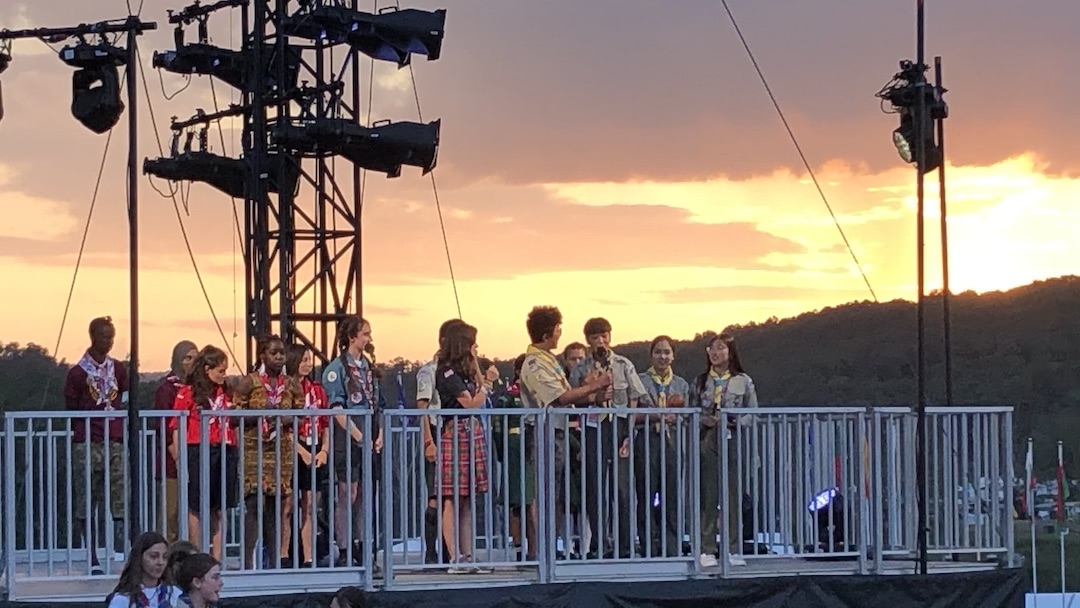 After a full day of sharing each other’s cultures in our basecamps, all 45,000 Scouts here at the Jamboree gathered at the Summit Stage for the second of three Jamboree shows: the Unity show.

As everyone settled into their seat on the grass, dancers from the Bolivian and then the Mexican Contingents, dressed in their stylish traditional dress, performed traditional dances from their cultures. As the show started, co-master of ceremonies Grecia Bárcena invited the Mexican dancers to the front of the stage, to accompany the performing Mariachi Estrellas.

After the Mariachi music, guest host Joe Canadillo was invited on stage to share some of his cultural and religious perspectives from the native tribes of his home in Arizona. Joe invited the Jamboree to take part in a ceremony of friendship, which he opened with a prayer in his traditional manner. He was followed by two Won Buddhist scouts from Korea who shared a buddhist prayer for the spirit. Two Protestant Christian scouts shared a hymn recognizing everyone’s importance to God. Two Hindu dancers performed a dance from their religion. And two Jewish scouts shared a video message talking about the importance of their religion to their work as scouts. The scouts were absent in order to celebrate Shabbat tonight. They ended the video saying, “Six days a week, we work to make a better world, but in the seventh, we work to make a better self.”

Jim Justice, Governor of West Virginia, followed these scouts, talking about his connection to the beautiful land surrounding our Jamboree. He and Joe Canadillo shared the history of this part of the country, from the 8000-year-old evidence of early peoples camping here, to the BSA’s purchase and development of The Summit in the last several years.

After Governor Justice, Two scout members of the Church of Later-Day Saints, three Sikh scouts, and two catholic scouts shared their religions and their wishes for unity as well.

Following suit, UN Envoy to Youth, Jayathma Wickramanayake spoke about her dreams of unity as well. “In order to bring about true, lasting peace, it is not just the presidents, prime ministers…. who take responsibilities, but communities that take leadership, especially young people.” Then she quoted a young woman she met in a Syrian refugee camp, saying “there are hundreds of reasons that divide us, but there are millions of reasons that unite us.”

Overall, her message is summed up in her closing statement: “You don’t have to be a superhero or anyone that wears a cape. A Scout in a neckerchief can change the world”

Several Orthodox Christian Scouts, a Taiwanese and two Nepalese buddhist scouts, and two Muslim scouts, also shared songs and prayers from their traditions, finishing with an amazing sung performance from one of the Muslim Scouts, singing “you’re my brother. You’re my sister. We’re one scout family”. As they said, “Like the Jamboree, Islam is all about unity.”

As we learned more and more about each other, everyone rose up, linked arms, and joined in a gigantic line dance, as we watch a video montage of the last several days. Still standing, Joe made one last prayer for unity, before everyone’s NOVUS device started blinking red and orange. As if lit on fire, the congregation of scouts glowed with the spirit of the Jamboree.

Now satisfactorily unified, we were all treated to a closing performance by four broadway singers, presenting several Disney favorites. The audience was transfixed, singing and dancing for the last 45 minutes of the show, before shuffling off towards our respective campsites.

You can find a video of the entire Unity Show here.

Faith and Beliefs It is clear that the World Scout Jamboree brings together a group with a diversity hardly rivaled by any other gathering. As such,...
Read More

The Jamboree Experience The World Scout Jamboree is nearly impossible to describe. It is easiest to say that it is an event like no other. It is...
Read More