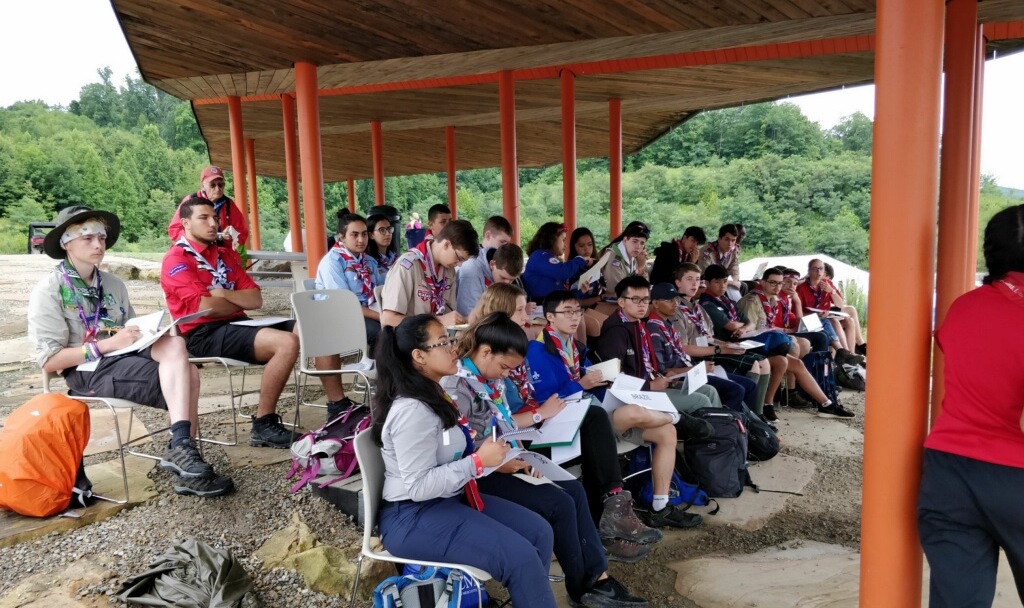 This morning session opened for the World Scout Jamboree’s Model United Nations. The Model United Nations is a three-day program in which participants will discuss modern global issues and create resolutions to address them. This system not only models the working of the United Nations, but also the World Scout Conference and World Scout Youth Forum system, which sets the agenda for the World Organization of the Scouting Movement every three years. That is to say, the skills being used by scouts in the Pigott Dining Hall today are the same skills used to address the world’s greatest problems today, both outside of and within Scouting.

Participants came prepared with position papers and research on their assigned topics as seen by their assigned country. Some of our US Scouts are representing countries such as France, Norway, China, and Iran. There are six committees: Economic and Social Council (ECOSOC), General Assembly Plenary Session, General Assembly Social Cultural and Humanitarian Committee, Security Council, and the Environmental Assembly. Topics of discussion relate to SDGs 3, 5, 10, 14, 15, 16 (Health and Well Being, Gender Equality, Reduced Inequalities, Life Below Water, Life on Land, and Peace Justice and Strong Institutions). More information on the program can be found here.

The Model UN Program was designed as a collaboration between several highly qualified minds. The Osgood Center for International Studies, an organization which has trained students via Model UN programs for 15 years has partnered with the Jamboree, providing both volunteers and curriculum. The Secretary-General, Jessica Tornell Garcia, has been instrumental in setting up Model UN programs with various groups, including the scouts, in Mexico. One program leader, Reuben Brigety, has represented the US to the African Union and to the UN Economic Commission for Africa and is now the Dean of the Elliot School of International Affairs at George Washington University. Several of the other volunteers are members of the World Scout Committee, giving them lots of real experience in similar situations.

This morning, participants broke into their committees for the first time, introduced themselves and their positions, before beginning their committee work. The Session lasts three days, meeting again tomorrow morning and Thursday morning.  Scouts have the option to continue their morning work in afternoon sessions as well. On Thursday, the committees will vote on their resolutions, proving their ability to coördinate and compromise internationally.

The Magic of the Summit With the close of the Olympics in PyeongChang today, we wanted to look at another important similarity between the games and...
Read More

Cooking Preview - Food Distribution at the Jamboree Remember Matt May from earlier this summer? Matt is back in a new video to talk about the...
Read More

Lessons from the Jamboree

Lessons from the Jamboree The World Jamboree sticks with you your whole life. Ask anyone who’s been before, whether they went to the 2007 World...
Read More