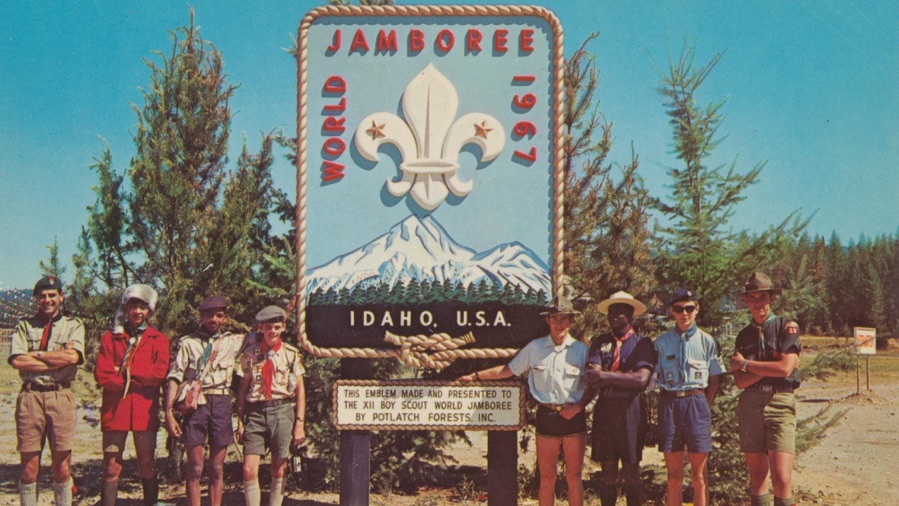 Déjà Vu, Life at the 1967 US World Scout Jamboree

This year is not the first time that the World Jamboree has come to the USA, but it is the second time. Kate Mulcahy, US Contingent Promotions Coordinator takes us back to Idaho in 1967 to experience the 12th World Scout Jamboree.

Header photo: August 1-9, 1967, at Farragut State Park, North Idaho. About 12,000 Scouts from 108 nations attended this first World Jamboree to be hosted in the Americas. These boys, from left to right, are from the following nations: The UK, The Philippines, Indonesia, France, Canada, Jamaica, Sweden, and the USA.

The first World Scout Jamboree was organized in 1920 by The Boy Scout Association in London. The theme was “Develop World Peace”. With exceptions for the war years, it has been organized approximately every four years, in the more recent years by the World Organization of the Scout Movement (WOSM), in different locations over the world.

Unlike any other youth event, the World Scout Jamboree invites you to surround yourself in diverse global cultures by joining your new Scouting friends at a single destination for 12 unforgettable days.

The only time the United States has hosted a Jamboree was the12th World Scout Jamboree in 1967. The theme was “For Friendship”.

It was July 31 to August 9, at Farragut State Park, in the Mountains of Idaho.

12,000 Scouts from 108 nations built by living side-by-side for 10 days. They spoke at least 26 different languages from French to Swahili. Some scouts learned a few new words from languages they didn’t know even existed. Participants shared daily customs and activities across the 5,600-acre campsite to enhance their view of the world.

For the first time, at a World Jamboree, they had a full program of aquatics.  Scouts enjoyed fishing and other water activities.

Bob Bullington, the BSA’s Assistant Chief Scout Executive Jamboree Coordinator, stated, “We’ve had 20,000 trout donated for the Jamboree. They presented a little problem at first. You can’t just turn them loose in the whole lake – the boys would never find them. So we had a cotton string net 648 x 45‘ made up.”  This net was stretched across the little Cove near the campsite to keep the fish in place!

Every evening included programs, shows campfires. Most of the national scout groups put on displays of their folk arts and home country scout memorabilia. The U.S. even arranged to have a full-scale professional rodeo show.

At that time only 50 buses, 50 trucks and a fleet of brand new cars, lent by the Chrysler Corporation, were needed to transport Scouts.

Although there were plenty of activities, the scouts also had open time so they could just wander around getting to know other kids from different countries. Many gained self-awareness to be open-minded and to try not to make assumptions based on nationality.

Dave , a 1967 participant and International Scouting Representative for nearly 20 years shared, “It truly changed my life. I was a teenager living in a small town and was going to leave scouting. My buddies were giving me slack about being a scout and I thought – hey, I might as well just quit. Then I heard about a World Jamboree and decided to go. It opened my eyes to all kinds of people. There was one significant moment during the 1967 Jamboree that I’ll never forget. I was sitting on a hillside trading patrol ribbon patches and talking with people from the US and all over the world, I discovered the incredible spirit of world scouting friendship.”

The world scouts had at least six different basic diets. They learned the ways people in other cultures and countries prepare food, and break bread together (and that not all cultures even eat bread). They were surprised at the flavors the world had to offer when they tried new foods such as a Jambo burger, salmon, fried chicken, beef stew and steak. For many, it was the first time to try the American classic – a peanut butter and jelly sandwich!

Scouts worshipped in many different religions and some of the religious services were translated into four languages. No fewer than 30 chaplains held services for many different faiths – including Roman Catholic, various Protestant denominations, Jewish, Muslim, Mormon, and Buddhist.

Then U.S. Secretary of State Dean Rusk said, “When you draw together nearly 14,000 scouts from 100 nations, you do something central towards building peace in the world.”

Do you think these Scouts returned home with a stronger sense of self-confidence in their abilities to problem solve, adapt to life’s challenges and understanding their world a little fuller? You bet.

Billington summarized, “Fostering friendship and understanding of others is the objective of each activity and ceremony throughout the Jamboree. No Scouting event has ever offered greater opportunities to advance the cause of goodwill and understanding.”

As it was in 1967, it remains the same today – The World Scout Jamboree is above all an educational event that brings together the world’s young people to promote peace and mutual understanding and to develop leadership and life skills.

The 24th World Scout Jamboree will feature the hallmarks of past World Jamboree programs, such as the Global Development Village, the World Scout Centre, a special sustainability initiative, and the socialization elements that allow participants to make lifelong friends from around the world. 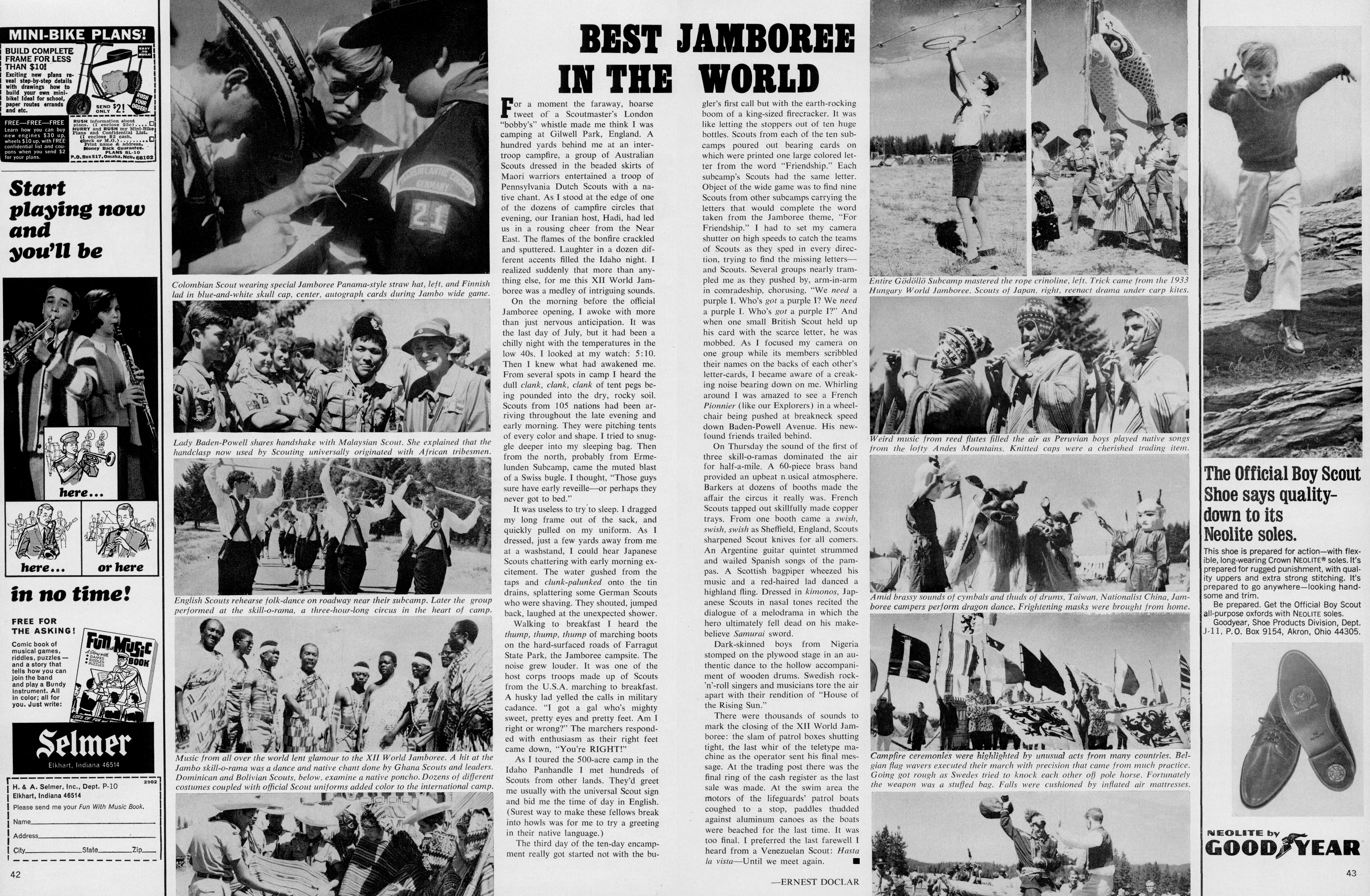 This 1967 article from Boy’s Life is all about the 12th World Scout Jamboree with some more fantastic pictures. Click the image to enlarge.

Application Information Are you ready to “Unlock a New World? The USA Contingent to the 24th World Scout Jamboree in 2019 is accepting applications...
Read More

Announcing Café USA The 24th World Scout Jamboree will be one of the most innovative Jamborees ever in more ways than one. It will be the first...
Read More