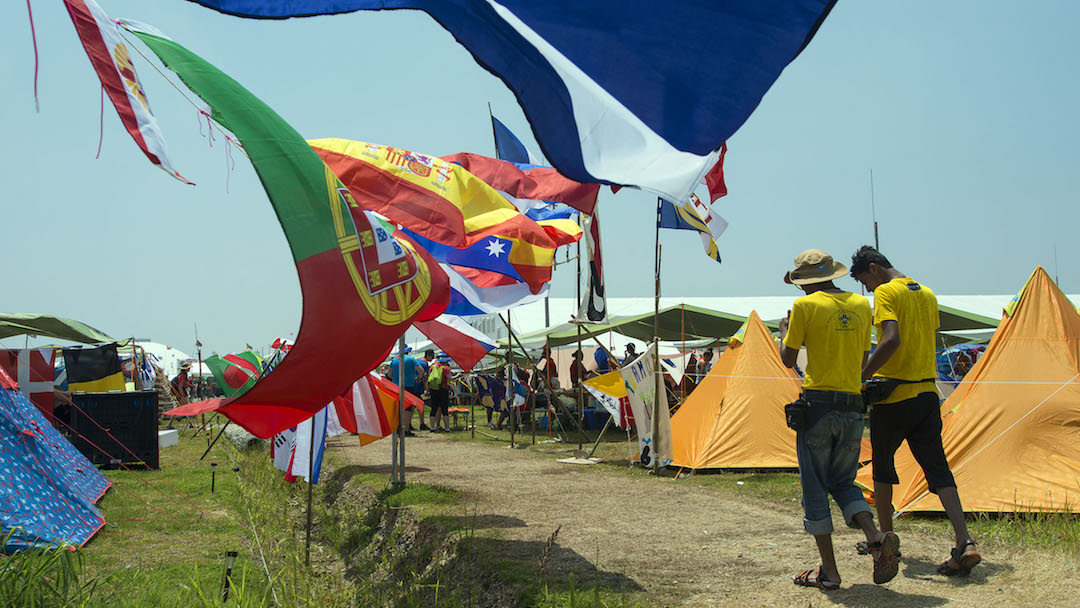 The World Scout Jamboree is nearly impossible to describe. It is easiest to say that it is an event like no other. It is more descriptive to say that it is like a National Jamboree, with more countries represented, and with a focus on international development and interconnectedness, and a myriad of other key differences. Frankly, the only way to really understand what makes a World Jamboree so special is to attend one yourself. In the meanwhile, we talked with a series of previous World Jamboree attendees and ISTs to try and glimpse the Jamboree experience through their eyes.

“What Brought you to the World Jamboree?”

Lili Hakonen-Meddings, a 23rd WSJ participant from Finland, knew that she would regret not going to the Jamboree. “I guess it was a once in a lifetime experience that I didn’t want to miss. You can only go to the camps [as a participant] once really.” Christa Waterwiese, an IST at the 23rd WSJ and a member of the 24th WSJ US CMT, says she decided to come to the World Jamboree two years earlier at the National Jamboree. “My favorite part of the National Jamboree was meeting international scouts. I wanted to see more of that … and I wanted to expand my horizons and learn about other NSOs [National Scout Organizations].” Tilly Livingston, a 23rd WSJ participant from Wales, says, “I literally just thought it would be a great adventure.”

Having now been to a World Jamboree, did it meet expectations? Was it a great adventure?

“It was awesome, amazing,” says Elena Lätti, a 23rd WSJ participant from Finland. “It’s definitely something everyone should do if they get the opportunity to.” “It’s the most fun that I’ve ever had,” says 23rd WSJ Participant Tee-Tee Nguyen. Reilly Granberg, three-time WSJ veteran, says going to the World Jamboree was “the best decision [he] made in scouting.”

So, what exactly made it so good? Can one boil the Jamboree experience down to one sentence?

Easier asked than answered. As Tilly’s troop-mate Rhian Richards explains, “I had a really, really lovely time but when someone is like, ‘you have to explain it in one sentence, and not just a spiel of stories,’ then it gets really tricky.”

A Spiel of Stories

Perhaps that’s just what is needed to explain the World Jamboree. Anyone who’s been to a Jamboree always has a myriad of stories at the ready.

“One of my favorite memories was when I worked for the International Service Team at the World Jamboree in Japan,” says Reilly. “At the time of the final stadium show at the Jamboree, I was helping out my safety department friends looking after the southern entrance. We had a six-hour shift. Probably at the halfway mark we were met by Japanese police officers that said the Prime Minister of Japan was going to make an appearance at the final show, and that he was going to be coming through the south entrance. I didn’t see the Prime Minister, but I got to see his motorcade and all the secret service agents that were protecting him.”

Celebrities aren’t uncommon at the World Jamboree. King Gustav of Sweden has been known to visit, as have Ahmed Alhendwai, the first UN Envoy to Youth; Michael Baden-Powell, B-P’s grandson and the heir presumptive of the Baron Baden-Powell of Gilwell; and Crown Prince Naruhito of Japan, among many others.

Yet the celebrities are far from the only exciting people at the Jamboree. Also notable, Reilly tells us, is “just the sheer amount of culture that I was able to interact with. The people that I worked with were so passionate about scouting and about life that I had a wonderful time.”

Lots of people means lots of swag to trade. “I’m a semi-serious patch trader,” says Reilly, “but I’ll say that I’ve had my share of good trades in my years at the Jamboree. The coolest patches are usually the ones from Japan and China. The Chinese dragons are the coolest!”

Patches (and scarfs, hats, uniforms… you name it, you trade it) are great physical reminders of all the different cultures you’re interacting with. Another less-physical reminder is the mélange of languages that surround you. While plenty of people speak English at the Jamboree (English and French are the two official languages of World Scouting), you will be amazed at the mix of different languages you hear walking down the street. The Jamboree is a great time to practice any language you’ve been learning. Spanish, French, Italian, German, Chinese, Japanese, Korean, Hindi, Arabic… you’ll find it at the Summit in 2019.

On occasion, scouts may get so caught up in all the languages that they forget that you can’t understand the language that they’re using. Rhian came up with a clever fix for this problem. “Whenever anyone would do that when I was there, I’d just start speaking really random bits in Welsh, hoping that they would get the point. That I can’t understand what’s going on.” Being scouts, most people are more than happy to help teach you a few phrases from their language! Maybe you’ll have the chance to help someone with their English as well.

Ultimately, the fun is limited only by the imaginations of those present. Lili and Elena met over a self-staged sock modeling competition. “I wasn’t even friends with Lili that much before,” says Elena but then, says Lili, “We became really good friends. … We had lots of crazy socks for Japan.”

Of course, this is a very small selection of the stories that could be shared from just one of 23 past World Jamborees. Going to the 24th World Scout Jamboree will surely be an adventure but no one can say for sure what that adventure will consist of. As Tilly reminds us, “Every single Jamboree will be different. That’s always something to tell someone, is, you know, someone can tell you how their Jamboree was but yours will be different.” The only thing you can know beforehand is that you won’t want to miss your chance to have this adventure for yourself. If you or a scout/scouter you know hasn’t applied yet, encourage them to apply here. We hope to see you there!

Contingent SWAG Kit Update! We know that SWAG, patches, neckerchiefs, bags, and everything, are a very exciting part of getting ready for the...
Read More

Jamboree Origin Story, Part I August 1 is the anniversary of Baden-Powell's famous Brownsea Island camp and is celebrated the world round as World...
Read More