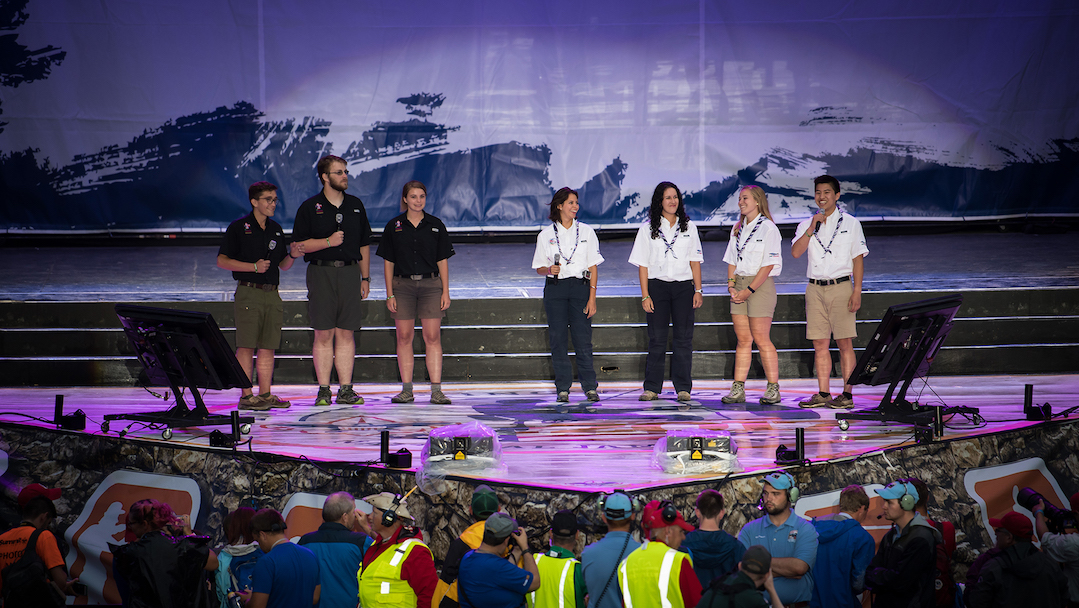 In our Jamboree Origin Story series, we’ve covered the nternational spread of Scouting and the formation of the jamboree concept. Finally, come 1920 at the Olympia Arena in London, the World Jamboree tradition would break out of concept and into reality.

Baden-Powell had been planning an international exhibition, now called a Jamboree, for nearly a decade. Once the first World War ended in November 1918, he was ready to make it the biggest, most spectacular scout event yet. A.G. Wade, the scouter in charge of organizing the Jamboree, quotes some of Baden-Powell’s Jamboree requests in Green Bar Bill Hillcourt’s Baden-Powell biography: “‘I want to encourage (1) acting, (2) Shakespeare reading. Do you think we could offer a prize for the best performance of any act from any play in Shakespeare by members of any two troops in cooperation?’ ‘I think we should add a competition in staves and give prizes for the best-decorated staff. Also for the best camping apparatus ideas.’ ‘Wade, provide a river in the arena for building bridges over.” Wade managed to make all of B-P’s requests a reality except for one: “I cannot find a hole or corner in Olympia for Shakespeare plays,” Wade told Baden-Powell.

Organizing the Jamboree was a monumental task. A.G. Wade worked so closely and for so long with Baden-Powell’s secretary Eileen Nugent that, at the end of the Jamboree, he got engaged to her. Theirs was probably the first of what would become many matches made at a Jamboree. Eileen Wade would go on to write her own biography of Baden-Powell that, with Hillcourt’s biography, is considered one of the most authoritative.

The Olympia Jamboree may have been the first Jamboree and it was quite the spectacle, but it was still rather different than Jamborees these days. One of the major events of the Jamboree on 30 July was held in the center of the arena with over 10,000 spectators watching the scouts perform. At 2:30 a giant curtain spanning half of the giant building fell revealing a scouting spectacle. Hillcourt describes: “Far to the left an old three-decked pirate ship out of Treasure Island was set against a tropical forest out of The Jungle Book, with primitive huts and log-houses; and in the middle was a rocky mountain pass leading up into the rafters of Olympia.” Events of the afternoon included a parade of nations lead by the American Scout Orchestra from Denver, Colorado, and a Native American show by the BSA.

The Jamboree ended with a similarly spectacular closing ceremony on 7 August 1920. The highlight of that night was when the scouts, unbeknownst to Baden-Powell, led B-P from his spot in the crowd into center stage calling on him for an impromptu speech.

“‘Brother Scouts,’” he said, according to Hillcourt’s biography, “‘I asked you to make a solemn choice. Differences exist between the peoples of the world in thought and sentiment, just as they do in language and physique. The war has taught us that if one nation tries to impose it’s particular will upon others, cruel reaction is bound to follow. The Jamboree has taught us that if we exercise mutual forbearance and give-and-take, then there is sympathy and harmony. If it be your will, let us go forth from here determined that we will develop among ourselves and our boys that comradeship, through the world-wide spirit of the Scout brotherhood, so that we may help to develop peace and happiness in the world and goodwill among men. Brother Scouts, answer me—will you join me in this endeavor?’ A resounding shout answered him: ‘Yes!’”

So, the first World Jamboree ended, but, as you know, that was just the beginning. The Olympia Jamboree, still loosely a scoutcraft competition, was won by the Danish contingent, including a young Bill Hillcourt himself. As a reward, Denmark was chosen to host the second World Scout Jamboree in 1924. Since 1924, there have been 21 official World Scout Jamborees.

Application Information Are you ready to “Unlock a New World? The USA Contingent to the 24th World Scout Jamboree in 2019 is accepting applications...
Read More

One Year to Go!

One Year to Go! The opening ceremony of 24th World Scout Jamboree will take place in 370 days from today. That’s only (roughly) 8,880 hours left...
Read More

A Recipe for a World Jamboree

A Recipe for a World Jamboree. Adventure, Friendship, Service, Sustainability, and Leadership are all wonderful ingredients on their own. Put them...
Read More