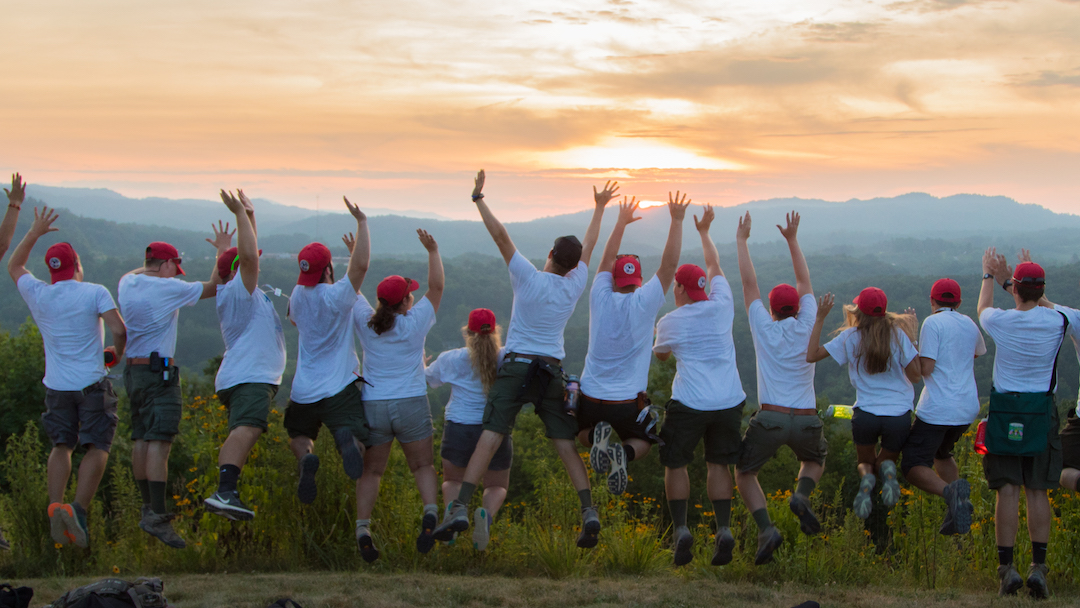 With the close of the Olympics in PyeongChang today, we wanted to look at another important similarity between the games and the Jamboree. These events wouldn’t be the same without the constantly changing venue and the unique challenges and opportunities that the venue provides. James Williamson, the 2017 Order of the Arrow Summit Experience (OASE) director and long-time Summit staff member, talked with us to share some of what makes the Summit a special Jamboree venue.

Few people can say that they have known the Summit for as long as James Williamson. After first meeting the Summit during it’s inaugural event, the 2013 National Jamboree, James came back to serve as staff for its first four summers as a newly minted National High Adventure Base.

“It was fun getting everything off the ground,” says James. “I mean, it was a rollercoaster ride because we were just trying to figure out everything. I really enjoyed arriving for 2014 because I knew this is a brand new base, a brand new experience.”

Although the base is now almost five years old, that rollercoaster hasn’t stopped. The Summit is one of four major BSA-owned camps, including Philmont, Northern Tier, and Florida Sea Base. Unlike these other camps, though, the Summit was designed to be the perfect Jamboree site. This means the BSA no longer needs to use another property (such as the previous National Jamboree site, Fort A.P. Hill) to host such events. As James explains, this is a game changer. “We have opportunities for those program areas that we never could do at Fort A.P. Hill. At Fort A.P. Hill, we would have to bring in temporary programs, like a temporary rock climbing wall or rappel tower. But the cool advantage of the Summit is, we can just develop and develop them over time and make them better as we go on.”

That continual development means that the Summit, like some scoutmasters, gets better with age. As James put it, “The cool thing, in my opinion, about the Summit is just thinking about all the potential it still has that hasn’t been realized yet … it’s going to be such an amazing place. It already is, but it’s just going to get better and better each year.”

What are some of these improvements? For one, Jamboree management has already improved since that first Jamboree in 2013. When asked about his favorite Summit memories, James quickly brought up the 2017 National Jamboree. “We learned a lot from the 2013 Jamboree. For instance, 2017 had better transportation for staff. 2017 had solar heated showers in Echo [staff camp]. … To me, 2017 Jamboree was really cool because that kind of confirmed, for me and for everyone, that they were taking Jamborees in the right direction.” Since scouting is about learning from mistakes, it’s safe to say that the 2019 Jamboree will be even better yet, coming on the heels of a highly successful National Jamboree last year.

The program areas are not only high in quality, they are also highly diverse. From skateboarding to swimming to shooting, it can be difficult to fit everything in. “Plan ahead.” is James’ advice. “Think about what program areas you want to do because you are not going to have time to do all of them. There’s just so much going on at a Jamboree, it’s not possible at all to do everything that a Jamboree has to offer.” 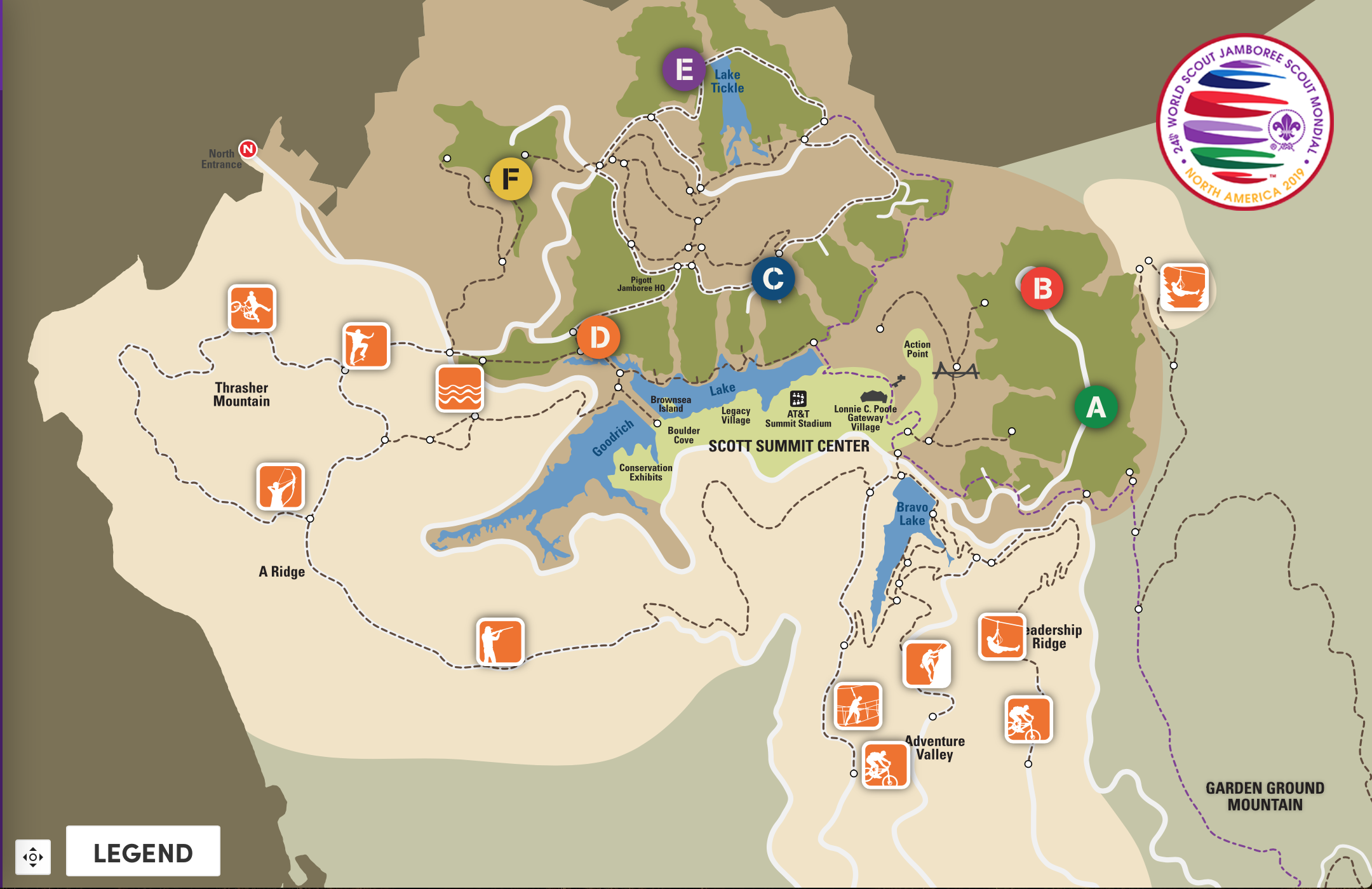 Easier said than done. With so many good options, how do you narrow them down? Are there any program areas that are better than the others? Any favorites, James?

“The canopy is really cool,” says James after some deliberation, “as far as I know, … the Summit is one of the only scout camps in the country that has it.” While the Summit’s Big Zip takes the typical zip line to unprecedented lengths, the canopy tours take a different spin on the same idea.

Canopy tours take scouts across and between the treetops on a multiple zip line tour of the forest. “Basically they go from a bunch of platforms within the trees. You have a giant forest area and then you have a whole bunch of platforms and you’re just swinging between platform to platform. I like to think of it as an Ewok village on Endor for anyone who knows Star Wars. Basically, you spend a few hours in the air, just zipping and hanging on to tree platforms.”

What does all of this have to do with the World Jamboree? In addition to having these programs available at the Jamboree, they also will lend a distinctive flavor to the event. “We’re going to have these really cool programs, these cool program areas that, as far as I know, haven’t been afforded by most other Jamborees in the past. So white water rafting, the canopies, the zip lines, the BMX, mountain biking, shooting… I think those are really going to be unique about the World Jamboree at the Summit.”

Of course, another unique element of the Summit’s World Jamboree will be the Summit itself. Placed on the banks of the New River in the beautiful West Virginian mountains, the Summit is a special place for those who know it.

“I would say, West Virginia is just a very beautiful state. It’s absolutely gorgeous. Beautiful sunsets. I really enjoy the state of West Virginia. It’s just a really wonderful place to be. There’s a magic about it; that kind of a magic that grows on you.“

“I know all the locals are really excited about this,” James reports. “All the local West Virginians have known the World Jamboree is going to be coming for quite some time and they’re all gearing up for it. They’re all really excited to be hosting World Scouting there, for a couple weeks. … The Summit is very excited to have this cool opportunity. I think every scout that goes there is just going to have a great time. I feel very confident about that.”

We won’t know for sure whether every scout will have a great time until the actual event, but James’ confidence certainly seems well placed. If you haven’t yet applied to experience the Summit’s magic next summer, be sure to do so on the apply page.

Reflections on the Model UN

Cooking Preview - Food Distribution at the Jamboree Remember Matt May from earlier this summer? Matt is back in a new video to talk about the...
Read More